Here is a theoretical map of the campaign led by Chedorlaomer’s coalition of kings against the pentapolis of Sodom, Gomorrah, Admah, Zeboiim, and Bela. This map was created in order to further research and understand the context of Genesis 14 for my M.A. thesis I am writing on Melchizedek. The map is based on research from several commentaries on Genesis 14 for the most likely origins of the eastern kings.

Digital modeling has mainly been a method of visualization in the archaeological realm, however it serves other purposes.  While the method of digital modeling still remains a specialized tool in the archaeological tool kit, it can also provide means to learn many facets of history.  The process of digital archaeological modeling forces the student to break the site down to its component level, a wall is not just a wall anymore, it is a system of stones working together to act as a wall and you must model each stone.  This can teach students how different cultures throughout time built their structures, leading the students to be in the mind of the ancient people they are studying.

Through working in a component style you see what elements make up the features of the site. In the program that I use, Presagis Creator, you can even apply the properties of the materials to the model to see how material types effect the construction.  It also gives you the option to view the features in ways that are not possible in real life: you can see them in isolation and even how they look underground.  This is something only possible in virtual reality; it creates “born-digital” research that could not happen without the aid of technology.

I am experiencing this first hand as I build the digital model of Tel-Azekah.  The first area I modeled was area W1 and there was a large Persian Period layer and a Middle Bronze fortification wall.  As I built these features I became very familiar with the building styles, then I moved to area E, which contains Roman period remains.  At first the new construction styles confused me, but soon I realized how the Romans style differed. I went from the rough field stone construction of the Middle Bronze age to the even hewn stones of the Roman period.  By having to reconstruct the remains, I gained a deeper understanding of these building styles that one cannot gain from reading, viewing, and even excavating.

The process of digital modeling forces the user to think about all of the aspects that go into the archaeological site.  Through modeling all the aspects of you have to think about the site like a spatial network; how does one object interact with others and questions like this fuel the modeling process. It allows me to immerse myself in a culture, to represent what they were and tell their story to a modern world.

Online resources for the study of the ancient world are increasingly available in recent years.  Interactive websites are creating environments conducive for learning in a supplementary way to publications.  This is accomplished though online collections, mapping, and 3D modeling.  By creating these resources for as many archaeological sites as possible, we are giving history a new life and a wider spread of influence in modern life.

The Nabatean people were lost in the sands of the desert for centuries only to recently be lost in the pages of books.  This fascinating and important culture existed in the ancient Near East, stretching from Arabia, across Jordan, and into the Negev and the Sinai.  They were skillful merchants and vital to the spice trade. They are best known for their architecture; specifically the cliff side carved building of Petra.  Another site was excavated in the 1930’s by Nelson Glueck that is essential to the study of Nabatean religion, which has long been ignored: Khirbet et-Tannur.

Khirbet et-Tannur is a Nabatean temple located in Wadi Hasa built on the summit of the 300m high Jebel Tannur 70km north of Petra.  Construction of the temple started in the 2nd-3rd century BCE and continued through three phases till the 1st century CE. The temple was highly decorated and contained statues and reliefs of many deities, such as Zeus Hadad, Atargatis, and fish and grain goddesses.  Without any remains of settlement, Khirbet et-Tannur was most likely a sanctuary for pilgrimages.  Due to its remote area the site has remained untouched for many years. 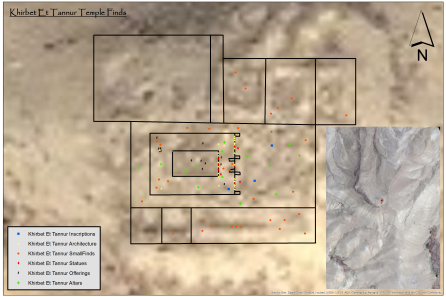 Renewed interest in the Nabatean culture and Khirbet et-Tannur has led to the recent release of two ASOR volumes on the site. The volumes detail Glueck’s excavation and propose new conclusions while giving readers an in-depth introduction to the site and the Nabatean culture of the region.  While these volumes are impressive, I wanted to create something for a wider audience.  Arising from a class project, the website for Khirbet et-Tannur was created Andrew Deloucas (now of Leiden University) and myself. The website combines an online collection of artifacts with ArcGIS mapping and Sketchup 3D models (both of which are available for download on the site) to create a resource for understanding this important site in the ancient world.  So, take a look through the site tannur.omeka.net

Cultural preservation is a growing concern in the modern world of archaeology and ancient Near Eastern studies. The rise and distress in the Near East has endangered archaeological sites with many becoming victims of destruction and looting. While this has been a problem since ancient times with grave robbers emptying tombs and burials for profit, the problem has become increasingly worse in modern times.

In the past few years, many sites in Syria are actively looted and destroyed due to the civil war and conflict.  This distress has created problems for archaeologists and the sites cannot be excavated, studied, or properly protected. The Roman city of Apamea has been particularly devastated. This extraordinary site boasts one of the largest standing colonnades and theatres in the Roman world.  It also contains many mosaics, church remains, and the remains of a large agora; the site was once a large hub of commerce and culture for the Syrio-Palestine Roman world. Now Apamea has been reduced to crumbling remains and looter’s pits, far from its condition in just 2011.  Below are two pictures of the site in 2011 and 2012.

In a course I am currently enrolled in at the University of Iowa, Digital Approaches to Art History, my professor, Björn Anderson, approached our class with the problem of representing and preserving history that succumbs to destruction. As a class, we decided the answer was to reconstruct the site using 3D models including Sketchup, Google Earth, and excavation reports.  I chose to model the Roman theatre, one of the largest of the Roman Empire with a cavea diameter of 139m.  As of 2010, only 1/8th of the theatre has been excavated, but thanks to excavation reports and drawings of the excavations led by Cynthia Finlayson from 2007-2010 I was able to create the reconstruction below:

From this project people will be able to view and study the ruins of Apamea from across the world.  Through preserving sites in this way scholars can create a virtual representation of the physical remains that will survive environmental and human destruction. This method of cultural preservation allows individuals who may not be versed in archaeological jargon to understand, appreciate, and draw attention to important remains that are inaccessible to many.  Through using programs like Sketchup and Google Earth, both of which have free versions, the archaeological record can come alive on the Internet and be available to everyone for free.